In a recent survey, we learned that nearly 60% of contractors use woven fabrics for the majority of their hardscape jobs. However, woven is not the ideal choice for every application!

We've developed a brand new guide that explains the different fabrics and grids that are commonly available on the market and how they can impact various types of hardscaping applications.

View a preview of the guide here and then click to download the full version for free!

We like to think of fabrics and grids as cheap insurance.

In this guide, we’re going to give a simplified lesson in soil mechanics, explain how using fabrics and grids can enhance various hardscaping projects, and provide a detailed breakdown of the most common types of products available on the market.

The term “geotextile” was coined by Dr. JP Giroud during a presentation at an engineering conference in Paris back in 1977. However, these materials were already being used in the field before this time.

In response to a deadly North Sea flood in the Netherlands in 1953, “the Dutch incorporated geotextiles into the extraordinary Delta Works flood protection scheme in the early 1960s.”

And constructed in 1970, “the Valcros Dam in France set the stage for a number of important dam and embankment designs that utilized geotextile filtration for long-term performance.”

(A Brief History Of Geotextiles: A 40-Year Update)

While the benefits geosynthetics have provided to the civil engineering world are apparent throughout history, it’s a lesser known fact that fabrics and grids can impart longevity and durability to smaller-scale hardscape projects as well.

In the next section, we’ll give a simplified lesson in soil mechanics to help paint the picture. 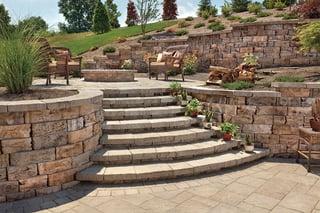 A Simplified Lesson In Soil Mechanics

Since geosynthetics help to improve soil characteristics, it’s important to first understand soil mechanics and the three main stresses that can impact a hardscape project:

Here are some definitions and analogies to clarify the meaning of each:

Compression: Two opposing forces that squeeze an object trying to compress it (i.e. standing on a soda can)

Tension: Two opposing forces that stretch an object trying to pull it apart (i.e. tugging on two ends of a rope)

Shear: Two pushing or pulling adjacent forces, acting close together but not directly opposing each other; a shearing load cuts or rips an object by sliding its molecules apart sideways (i.e. pulling on two pieces of wood that have been glued together or cutting a branch with pruning shears)

In the context of a hardscape project, it’s important to simply keep these stresses in mind when choosing a geotextile or grid. Next, we’ll take a look at how these products help to alleviate the three different types of stresses.

Intrigued? Want to keep reading? Download the full version of the guide here!