The 4 Types Of Geotextiles Explained

THE 4 TYPES OF GEOTEXTILES EXPLAINED

Learn more about these functions by reading 5 Ways A Geotextile Can Improve Your Hardscape Design.

With all of the different fabrics available in the market, choosing the right one for your particular application may be a tad daunting. In this blog post, we’re going to explain the four main types of geotextiles and the key benefits of using each.

A QUICK LESSON IN SOIL MECHANICS
Since geotextiles can actually help to improve soil characteristics, it’s important to first understand soil mechanics and the three main stresses that can impact your project:

Here are short definitions for each:

Compression: Two opposing forces that squeeze an object trying to compress it (i.e. standing on a soda can)

Tension: Two opposing forces that stretch an object trying to pull it apart (i.e. tugging on two ends of a rope)

Shear: Two pushing or pulling adjacent forces, acting close together but not directly opposing each other; a shearing load cuts or rips an object by sliding its molecules apart sideways (i.e. pulling on two pieces of wood that have been glued together or cutting a branch with pruning shears)

Everything there is to know about hardscaping fabrics and grids ... all on a single webpage. Discover it here!

In the context of a hardscape project, it’s important to simply keep these stresses in mind when choosing a geotextile.

THE 4 MAIN TYPES OF GEOTEXTILES
There are four main types of geotextiles:
1. Woven
2. Non-woven
3. Polyspun
4. Spunbond

Let's review these different types and how they can be affected by stress.

Woven Geotextiles
Woven geotextiles perform the functions of separation and reinforcement. They are referred to by tensile strength and offer a very high load capacity. While woven fabrics are relatively impermeable and won’t provide good drainage, their high compressive strength makes them an ideal choice for roads, parking lots, etc.

Non-woven Geotextiles
Non-woven geotextiles are felt-like and don’t offer much in the way of compressive, tensile, or shear strength. But that’s ok because their main functions are separation, filtration, and drainage. They are referred to by weight and ideal for any hardscape project where filtration or drainage is needed. Non-woven geotextiles can also be used for erosion control.

Click here to learn more about The Difference Between Woven And Non-woven Geotextiles.

Spunbond Geotextiles
In the world of fabric manufacturing, the spunbond process is considered the fastest manufacturing method for nonwoven fabrics. During the process, extruded filaments are spun onto a belt and bonded by applying heated rolls. Like polyspun geotextiles, spunbond fabrics will provide drainage but no reinforcement. They are referred to by weight and commonly used as weed barriers or as drainage fabrics.

Now that you’re familiar with the four main types of geotextiles, which one is right for your next project? Download a copy of our Geotextile & Geogrid Pocket Guide to help you quickly decide! 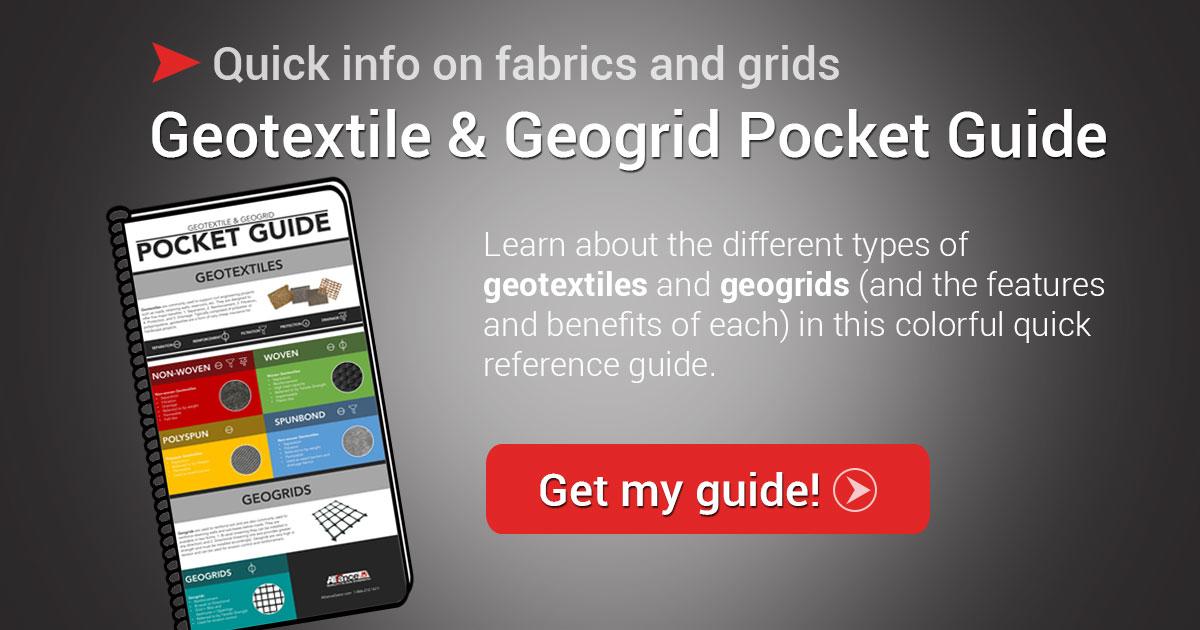